It is strongly recommended that you not end the DataGate service on the IBM i (ENDDG8SVR) until all end-user jobs are ended–either normally or manually. Ending DataGate with active user jobs leaves object locks and other artifacts danglng that make it challenging to restart DataGate. To end all end-user jobs, you need ot know how to identify end-user jobs. This article explains how to do that.

When a user connects to the IBM i, a corresponding job is created on the IBM i. These jobs can be found with WRKACTJOB or WRKSBSJOB and are listed as DG8_NET jobs (you can see one at the end of the WRKACTJOB display below). 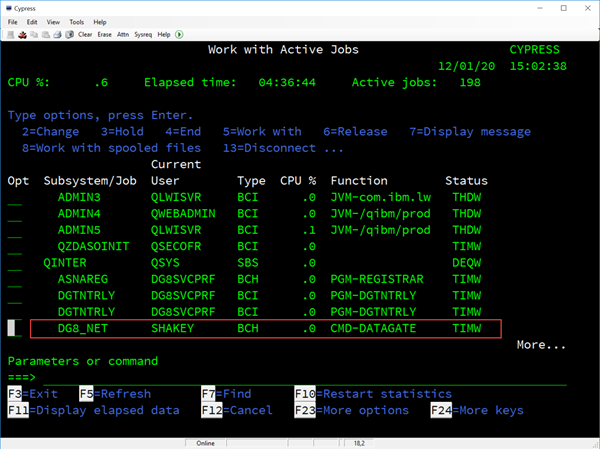 Figure 1. Using WRKACTJOB to find DataGate end-user jobs –which are the DG8_NET jobs. Going back in time, prior to DataGate 7.x, these jobs were named DG8_43.

To see more about the job, enter a "5" to work with the job then enter a "10" to see its job log. For a fat-Windows client you see the following information: 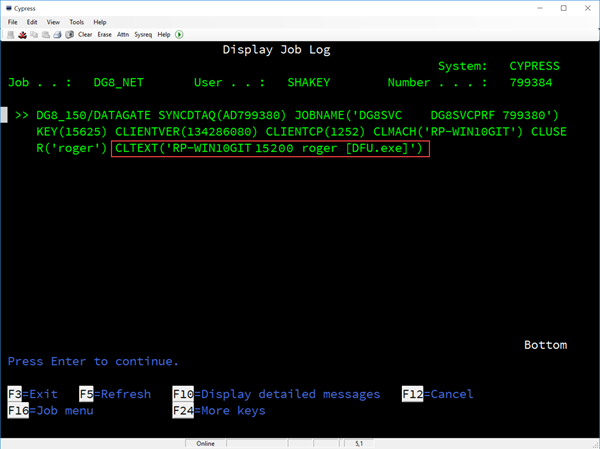 Note that the name of the DataGate library is the first thing shown. In this case, this DataGate instance is in library DG8_150.

Other useful information in the job log for a fat client apps are:

CLTEXT  – Information about the associated AVR program’s process. This shows the Windows machine name (RP-WIN10GIT, the task manager process number (15200), the Windows user again (roger), and the name of the executable. If the AVR program is a Windows fat client the executable will end in "EXE." In this example, an AVR program named DFU.exe is running. If the AVR program is a Web app, rather than showing an EXE, the program will be listed like this [/LM/W3SVC/xxxxx] which indicates the AVR app is running under IIS (Windows’ Web server). See this article for more on process identification under IIS.

Figure 2b. The corresponding Windows Task list entry for the job shown in Figure 2a.

Similar information is shown for Web applications in the IBM i job log. However, the value of CLTEXT is a little different. 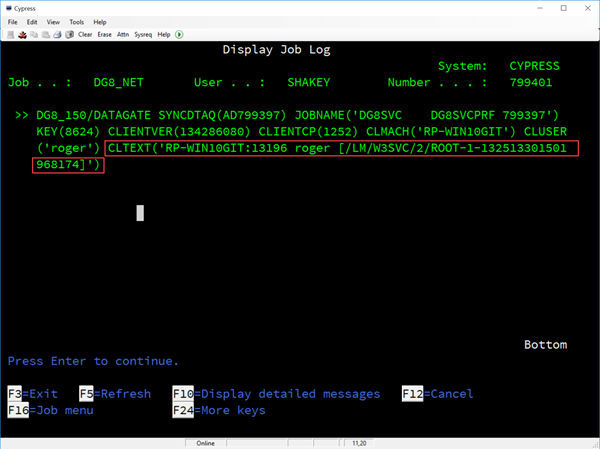 For Web applications, CLTEXT doesn’t show the executable name, but rather lists the IIS metabase path for the executable (which is associated with either an IIS Web site or virtual directory.

The CLTEXT shows that the client is associated with Windows process 13196. If you look at the Task Manager on the Windows PC where the Web app is running, you’d see this corresponding Windows task listed as shown below in Figure 3b.

Figure 3b. The corresponding Windows Task list entry for the job shown in Figure 3b.

Lifetime for a DataGate IBM i job

For fat-Windows clients, the IBM i job will end when the corresponding Windows executable ends. For fat clients, there is one job per Windows executable instance. That is, if a user opens two instances of a Visual RPG fat client app on her PC, each instance has its own job on the IBM i. All fat client jobs originating from the same Windows client count as one seat against DataGate per-seat-based licensing. That is, any one user can have as many executables running from her PC and they all count as one license.

For Web applications, which use connection pooling, the job ends when it has been inactive for the time specified by ASP.NET’s Session Timeout value. Read more about connection pooling and IBM i jobs.  Most Web apps today are against a WebPak site license which allows unlimited jobs. But some customers still have per-seat DataGate licenses for DataGate WebPak. With per-seat WebPak licensing, all activity initiated from a user’s browser count as one seat against DataGate per-seat-based licensing. That is, any single browser instance can run multiple instances of an AVR/Wings Web app(s) from different browser tabs and those all count as one license.