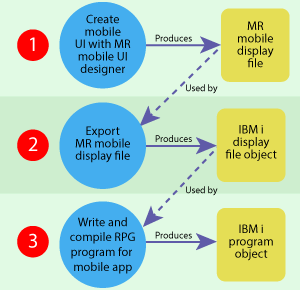 Three-step workflow to create a Mobile RPG app
ASNA Mobile RPG builds on your RPG team’s existing skills to empower them to create smartphone and tablet apps for your IBM i with nothing but ILE RPG.

Mobile RPG uses a simple three-step workflow to create a mobile app. This workflow is quite similar to the general workflow of creating a traditional RPG program where you create display, compile it to a display file object, and then write an RPG program using that display file. Mobile RPG implements these three steps like this:

A sampling of Mobile RPG’s icons

Icons are intrinsic to mobile applications. They provide superb visual cues to your users showing how to initiate actions and navigate your mobile applications.  Mobile RPG includes more than 225 icons (five of which are shown to the left) that you can easily assign to buttons or other user interface elements. These icons can easily be sized and colored.

Mobile user interfaces do vastly different things than traditional green-screen interfaces do, but Mobile RPG needs to provide a natural way for an RPG programmer to populate its user interface. For example, consider displaying a map of two addresses. Several of Mobile RPG’s user interface controls use subfiles as the bridge between modern mobile UI and RPG. This abbreviated example shows what this means. Consider the need to map two addresses on map. Mobile RPG provides a map control (called in the DDSGMap control) that displays an active Google map with dynamically provided addresses. Mobile RPG’s challenge is to map the list of addresses provided to the map control with an idiom that is easy for an RPG program to populate. The answer: an RPG subfile! After placing the map control on the mobile UI, you then set a handful of properties (properties are fields that define UI control behaviors). In the case of the map control, you provide an address field name and length, the RPG indicator that when on causes the subfile to clear (when its controller record format is written to), the subfile name, and the subfile controller name. These properties are shown in the yellow call-out box in the image below: 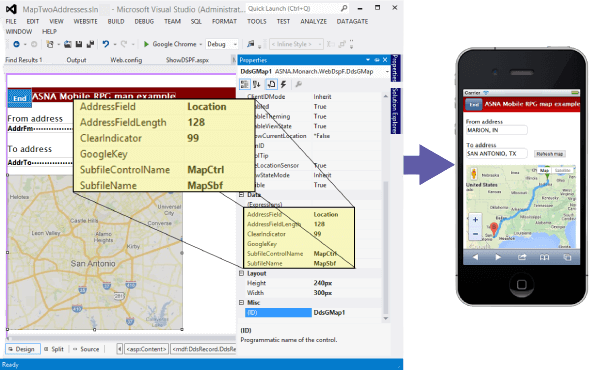 A quick at the RPG

After creating this mobile UI, a simple point-and-click process exports the mobile UI to a traditional IBM i display file object. This object provides the display file object against which an ILE RPG is compiled. The simple RPG code to populate the Mobile RPG map control with two addresses is shown below. This little program writes two rows (each providing an address to the MAPSBF subfile in the ShowMap subroutine. Although this program is rendering only two addresses, you can easily map a complex route with many addresses by writing more address rows to the subfile. At runtime, IBM’s Open Access redirects the workstation data to the Mobile RPG mobile UI. With this exception of the HANDLER keyword on line 2, the RPG program is written with very simple, standard RPG techniques. This program uses ILE RPG’s freeform syntax, but that’s optional–you can write the RPG anyway you like!
Read ASNA Mobile RPG FAQs